Scoundrels, Cutthroats, Barbarians, and Other Hero-Types 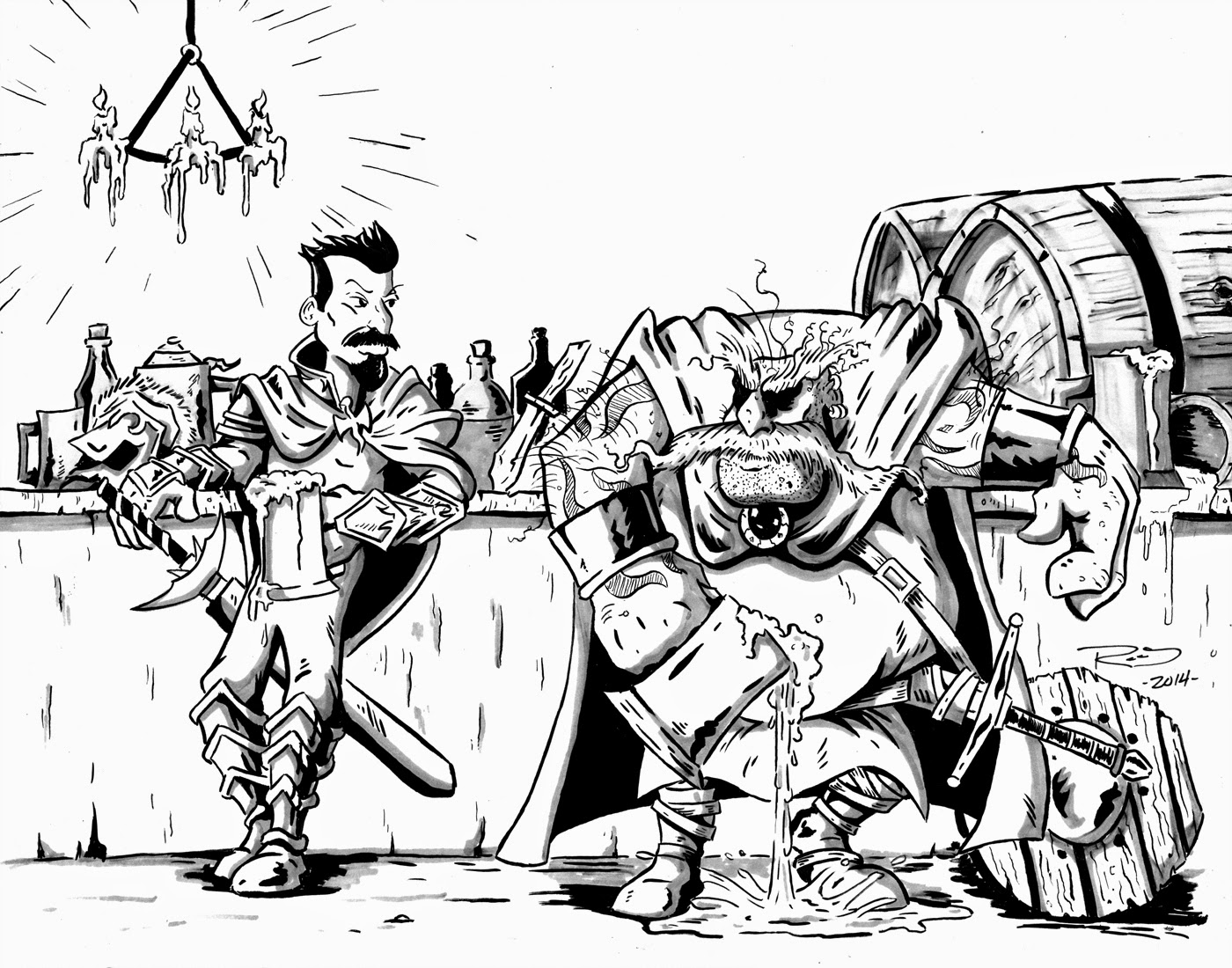 This is a piece called "Happy Hour at Ye Drop Dead Weasel" that I drew for a friend and fellow artist/creator J.F. Dubeau.  The slender, dark-haired gentleman on the left is Leonid, a dragon rider from J.F.'s comic "The Eldritch Age" (Ye Drop Dead Weasel is also a setting from that comic).  If you've read my blog, or followed me much at all in the past year, you'll likely recognize the brutish warrior on the right as The Warrior Igor.

I loved drawing our characters together because it is a display of our friendship and mutual respect for each other's work that I'm proud of.

Also, these characters are both really not the type of characters to get hung up on things like "being an outstanding person", "playing fair", "having virtue", or "handling things in the calmest way possible".  Both of these characters are not afraid to get their hands dirty in order to come out ahead.

This week, I listened to an audio version of "The Voyages of Sinbad the Sailor" from "the Arabian Nights" on "The Classic Tales Podcast".  There is a point in one of the voyages (the third, I think), when Sinbad is buried with his wife, who has died, because it is the custom of the land he's in.  He survives by murdering others who are buried alive with their dead spouses after him and taking the rations they are buried with.

The hero murders other victims in order to survive.

This is a plot point that I don't think you would see very much of today.  We love anti-heroes, we like scoundrels and bad guys to a degree.  For the most part, we like them because they buck what is portrayed as a broken system, but we don't typically see a hero who is willing to murder an innocent in order to save themselves.

Han shot first, but that was before George Lucas decided that it portrayed him as an unfavorable character, even though he shot Greedo, who was a menace and a shady cutthroat.  What he did in the "Star Wars" re-edit was have Greedo shoot first, and miss him from two feet away, leading us to believe that Greedo is less of a menace, and more of an ill-tempered, slow-witted, and unskilled being who couldn't quite get his motor skills to work in his favor.  Way to go, George Lucas, now Han Solo didn't murder a murderer, he murdered an alien who was less fortunate than him.  It was like beating up a child.  Way to paint a better picture of that character.

My point is that it matters that Han shot first.  It matters that Sinbad killed people to survive.  It matters that characters who range from rough around the edges to animalistic survivalists exist.  It matters that these characters exist to show that notions of good and bad as black and white are bunk.  This is a gray world full of gray characters and actual people who are gray.  Nothing is all good, all bad, all virtuous or all evil.  Varying degrees of these things exist in real life, and so should they also exist in fiction. 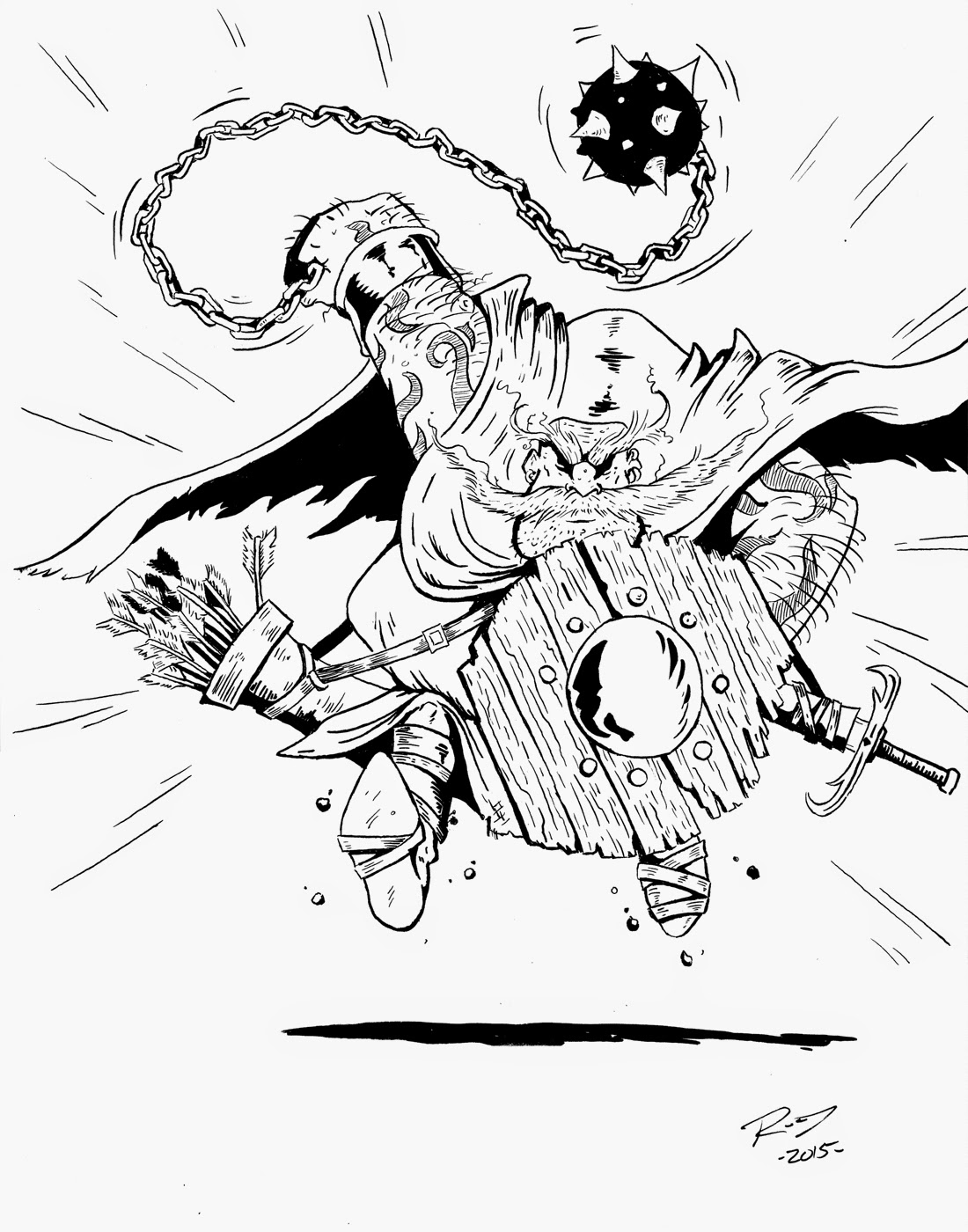 Very cool. I love how you incorporated both of your characters, and how it has deeper meaning.