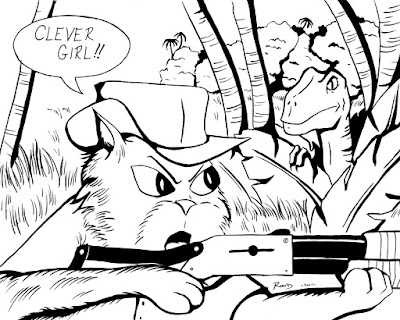 "Clever Girl" is my tribute to Robert Muldoon... No, not the game warden of Jurassic Park, but my brother and sister-in-law's cat whom they named after said game warden. Yes, once I figured out that they did NOT name him after the former Prime Minister of New Zealand and that he was named after a character in a great movie/book, I jumped all over the bristol and threw some ink down. 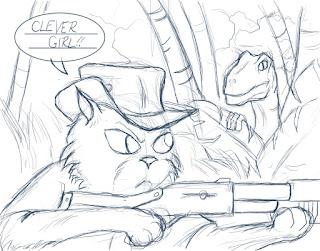 Here are the pencils of this piece. I did these in Sketchbook Pro before printing them out to be gone over in bristol. This was a lot of fun because I got to do a fun and slightly off-center tribute to a great movie and a great scene in that film. Thanks Eric and Jenny for giving your cat an inspiring name for me to play around with.